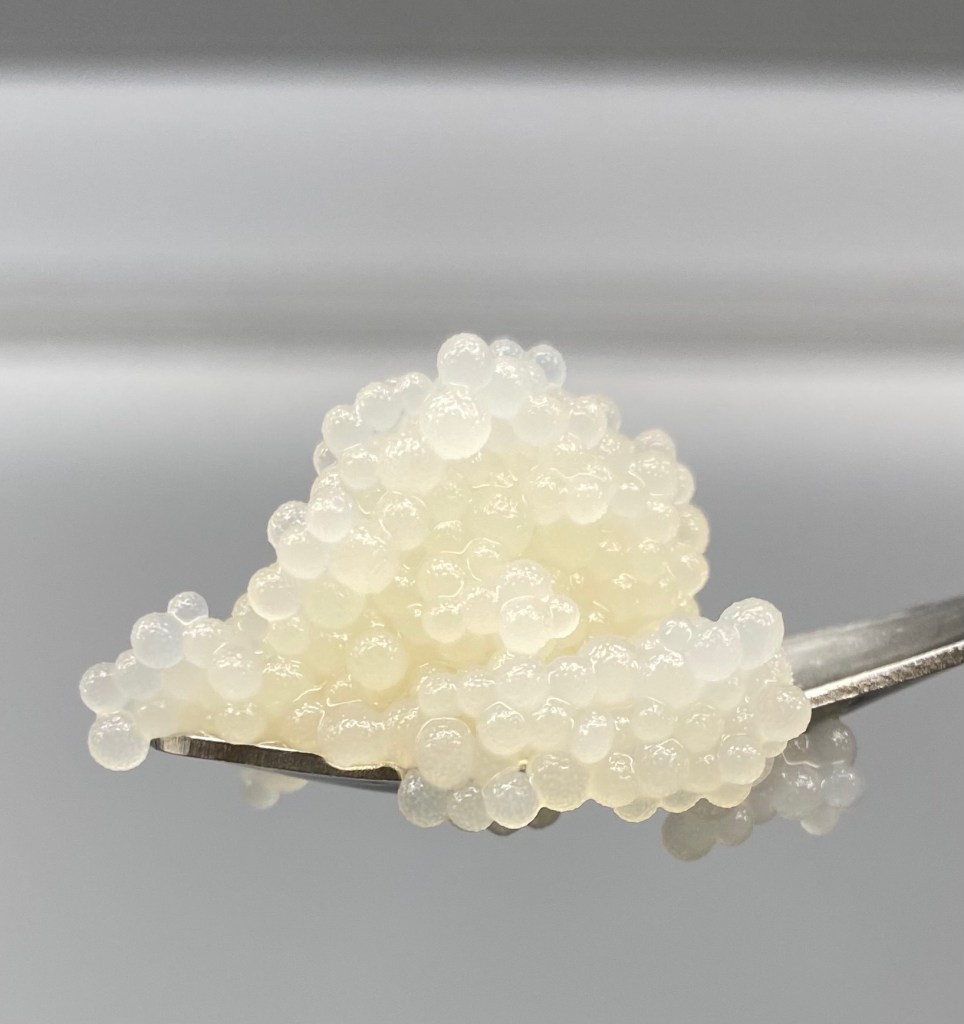 Developing psilocybin for use in therapy is a balancing act. In their natural state, the potency of psilocybin mushrooms can be inconsistent, which makes administering precise doses difficult in clinical and research settings. Synthetic psilocybin is notably more consistent, but focusing on just one active substance contained in these mushrooms excludes the potential spectrum of experiences offered by other compounds in these fungi.

Jim Keim, CEO of Mimosa Therapeutics, thinks he’s found a balance. Mimosa cultivates the mycelium root structures of psilocybin mushrooms in bioreactors creating a product that Keim says has an exact and consistent potency containing all the natural compounds found in the fungi. It is sold by the company in elegant droplets Keim calls Pearls.

Raised in a liquid culture, the Pearls are tiny, ethereal globes made from mycelium that resemble caviar. “We have this beautiful way to offer the best of both worlds,” says Keim. “It’s both the consistency of synthetics, but the full spectrum of mushroom fruiting bodies.”

Keim is a psychotherapist with a background in trauma therapy. He encountered the therapeutic potential of psychedelics when he came to the San Francisco Bay Area and saw firsthand both the dramatic difference psychedelics could make in his clients’ lives, and how cautious therapists had to be with a controlled substance that could be of varying quality and consistency.

“People were rightfully very, very careful,” says Keim. “It constrained the quality of training and the ability to pass knowledge on.”

As the move toward decriminalization of psychedelics continued to gather momentum, Keim wanted to produce dependable psilocybin for other therapists coming into the field. Mimosa is the result of that desire, a Public Benefit Corporation focusing on delivering non-synthetic psilocybin in a way that is both manageable for providers and responsive to the evolving market of therapeutic psychedelics.

“Many psychedelic therapists such as myself prefer different mushrooms for different contexts, goals, and types of emotional distress,” says Keim. He notes that there are also benefits from naturally occurring synergistic substances in mushrooms that could have an entourage effect to help potentiate psilocybin. “The discovery of MAOI’s in mushrooms by our VP, Felix Blei is an example of one well-understood potential contributor to this effect,” said Keim, referring to monoamine oxidase inhibitors (MAOIs) that are also present in ayahuasca.

According to Keim, the goal of Mimosa is to customize the ratios of various compounds found in fungi and the experience they provide, without using extraction or other post-harvest technologies. “Another goal is to quickly evolve our offerings to continually improve them with facilitator and therapist feedback, expanding the range of experiences that our offerings can provide,” says Keim.

Keim believes that the evolution of therapeutic substances in response to consumer/clinician feedback is nearly impossible for drugs seeking FDA approval. “That process requires one to make a staggering investment in one, stagnant drug and then stick with it for a decade of approval process antics,” says Keim.

Keim founded Mimosa in 2020 with Amanda Feilding, founder and director of the Beckley Foundation, and Bob Stanley, co-founder, senior garden steward and pastor of the Sacred Garden Community and founding chair of Decriminalize Nature Oakland.

The team also currently includes mushroom scientist Felix Blei, formulation chemist Tyra Callaway, and Alan Rockefeller, who Keim suspects is one of the only mycologists to get a fan page on Facebook.

Less than two years after its founding, the company has launched a production lab in Amsterdam and a mushroom genetics lab in Oakland, California.“We can study DNA in Oakland, and we can actually produce our offerings in Europe,” says Keim.

“The mushroom is like the apple on an apple tree. The fungi pops up a fruiting body. That’s not the organism; that’s the reproductive organ,” adds Keim. “All the alkaloids of interest start underground.”

The resulting Pearl is very consistent in potency, which is measured with high tech lab equipment, says Keim. An unexpected side effect of the mycelium pearls is their gentleness on the stomach and the taste—or lack thereof.

“They’re very neutral in taste, and mushrooms are kind of objectionable tasting to some people,” adds Keim. “They cause significantly less nausea.”

The Pearls are currently being beta tested in the Netherlands, where psilocybin mycelium, sometimes known as truffles, is legal to grow and sell, says Keim. The owner of two smart shops there are giving away free samples of the Pearls.

Also for sale in the Netherlands is Nycer, Mimosa’s mycelium Pearls in microdosing form designed to increase focus and enhance creativity, awareness and mood. “It’s kind of like the way you wish coffee worked,” says Keim.

Keim’s vision for Mimosa is to continue to evolve its products. “We want to offer a palate of experience,” he says. “Too many companies are taking a big pharma approach—one pill fits all. Once you start working on that process, it’s eight to ten years before it’s approved. You can’t be responsive. You can’t be nimble.”

According to Keim, a responsive and nimble approach to psilocybin is also beneficial for individuals. Psychedelic experiences can range from a warm hug to cosmic encounters, and Keim says Mimosa wants to help therapists facilitate those custom experiences for their clients. Whether they are experiencing PTSD, addiction, anxiety or depression, says Keim, Mimosa has a novel method of delivering precise levels of psilocybin for therapeutic use.

John Turner, psychedelic advocate and founder of the website Trippingly, is an early investor in Mimosa and an advisor to the company. Turner says he believes that the market for products like the Pearls is a welcome addition to the market for its flexibility and scalability.“Improving nature while keeping entirely natural is this crazy innovation they’ve done,” he says.

Turner says clinicians and therapists need the ability to do precise dosing. “The FDA model where people need really precisely dosed psilocybin, these guys are opening up an all natural path to do a clinical track offering,” he says.

While he believes that the Mimosa product is ideal for therapeutic purposes, Turner says offering a consistent quality of psilocybin also supports personal growth for individual experiences. Turner notes that his own experience of Pearls was positive in ways he wasn’t expecting.

Turner says he typically has nausea with psilocybin mushrooms, and even with LSD, but not with Pearls. He says his experience with Pearls transformed how he saw mushrooms. “Consuming them is really pleasant,”says Turner. “The onset is relatively quick. And I had zero nausea.”

The quality of the experience becomes especially important as the market for psychedelics opens up, says Turner. “The biggest risk we all face is people having bad experiences as psychedelics become more prevalent.”

Licensing For Broad Therapeutic Use

Mimosa has one of the world’s largest magic mushroom genetics libraries, and its bioreactors allow the company to cultivate mushrooms quickly and precisely, says Keim. “It takes six to eight weeks to grow mushrooms. It takes us a week to ten days,” Keim adds. “We can control the dosage. We can even change the ratio of alkaloids.”

In an effort to make Mimosa’s products as available as possible, Keim and co-founder Bob Stanley wrote a patent pledge, granting a royalty-free license to individuals commercially producing psilocybin mycelium until they start earning over $500,000 or $1 million in certain cases. “Patents can be used in very abusive ways,” says Keim. “We want to show how patents can be used in a protective way.”

Keim says Mimosa expects to roll out their products for broader availability in both the U.S. and Europe in April. They are also hoping that their licensing structure encourages other producers around the world. “We want to encourage people to actually jump into this market,” he adds.

Turner says Mimosa’s offering means that more people can have high quality psilocybin in responsible settings. He says this is due in part to Mimosa’s licensing strategy of encouraging others to produce Pearls.

“What we all need to do in the psychedelic world is be nimble.You need flexibility on who owns the manufacturing,” says Turner. “What Mimosa brings is this really nimble business model. I don’t think many companies can do that economically. They can license their tech and still make money doing that, and they can scale up and down.”

Turner believes that the pattern of decriminalization for psychedelics will likely follow cannabis: non-uniform and state-by-state. Accordingly, adjusting to the scale on which one can grow and sell psychedelics in any given area – be it Oakland, Portland or Seattle – will be valuable, says Turner.

According to Turner, Mimosa has the means to adjust production in a way that will produce affordable psilocybin while still maintaining quality.“That’s the nimbleness we’re going to have to deal with psychedelics until this gets legalized,” says Turner. “It’s going to be interesting. Nobody knows how it’s going to play out, but it ain’t going away.”

The post These Natural Psilocybin Droplets Come in Exact Dosages and Don’t Upset Your Stomach appeared first on Lucid News.