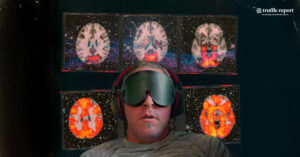 We are in a mental health crisis, and we need new, more effective therapies fast.

Psychedelic drugs such as psilocybin, DMT, LSD, MDMA, and ketamine have shown promise as potential treatments for a range of mental health disorders, including treatment-resistant depression, anxiety, trauma, and post-traumatic stress disorder (PTSD). But due to the restricted status of these drugs, turning them into medicines is a long and expensive process.

The use of real-world evidence (RWE) in psychedelic drug development might offer an alternative.

One company using RWE to its advantage is Vancouver-based psychedelic drug developer Albert Labs, whose research hub is in Manchester, the United Kingdom. Using RWE, this company is researching psilocybin (the psychoactive compound found in magic mushrooms) for cancer-related anxiety and depression.

Truffle Report reached out to Dr. Malcolm Barratt-Johnson, Albert Labs’ Chief Medical Officer and a former employee of the U.K. Medicines and Healthcare Products Regulatory Agency (MHRA), to discuss the role that RWE could play in fast-tracking psychedelic drug development.

Dr. Barratt-Johnson tells Truffle Report that RWE has been used for hundreds of years. “It’s looking at a medicine in the context in which it will be used, the real world,” he explains. “It’s not something wacky. It’s just a different way of looking at datasets.”

“If you look at cancer patients, most of the data we’ve collected about oncology therapies over the years is RWE because we obviously don’t want to give healthy people cancer drugs. That would be completely unethical.”

According to a 2021 analysis (led by researchers at the University of Macau) of how drug regulatory authorities worldwide integrate RWE in evaluating new treatment approaches and monitoring post-market safety, several strategies are being deployed across the United States, Europe, and China.

The authors of this analysis noted that regulatory authorities in the European Union and the United States have accumulated rich experience using real-world data to evaluate the safety of medical products in past decades. The analysis also found China was relatively limited in its adoption of RWE when compared to the EU and US, but that this has significantly improved in recent years.

“Over the last 20 years, we’ve developed a much better methodology for collecting data from patients in the real world,” Dr. Barratt-Johnson says. “If you go back to the 1980s, we didn’t have the computing power to collect and analyze the data.”

Today, randomized controlled trials (RCTs) are considered the gold standard when it comes to establishing the safety and efficacy of a drug to meet drug approval requirements. In this type of clinical trial, the patient population is randomly split into two groups: one group receives the product that is being tested and the other group receives an alternative.

This type of study is a powerful tool for researchers to examine the cause-effect relationship between an intervention and its outcome. However, clinical studies typically involve small sample sizes and focus on internal validity, which can sometimes compromise generalizability to real-world populations.

It can also be incredibly time-consuming to put a drug or medical product through the clinical trials model required for drug approval. In the U.S., even once a psychedelic drug has made it through preclinical and clinical trials to the approval stage, it will take an average of 10 months for it to get the tick of approval from the United States Food and Drug Administration (FDA).

For psychedelic drugs, there are added complexities thrown into this process due to the restricted nature of these substances, which also draw out the drug development process.

That’s where RWE comes in. Where an RCT measures a drug’s efficacy, RWE measures its effectiveness: complementing clinical trials by generalizing research findings from a trial to the general population. RWE can also provide important information in other areas, including the natural history and course of a disease, effectiveness studies, outcome studies, and safety surveillance, to support regulatory decision-making and, in turn, reduce adverse effects and improve clinical outcomes.

The Benefits of Using Real-World Evidence in Psychedelic Drug Development

As Dr. Barratt-Johnson explains, RWE is currently coming into the drug development process as Phase 4 data: to evaluate the safety and efficacy of a drug after it has already been approved. “RWE would come in at the end of the life cycle,” he tells Truffle Report.

But he explains that by considering this research at an earlier stage, pharmaceutical companies can bring a drug to market faster, and more cost-effectively.

“If you are developing a drug it costs on average £2.1 billion (about $2.8 billion USD),” Dr. Barratt-Johnson says. “I don’t want to put a value on it because every medicine is different, including psilocybin, but with RWE you could probably reduce that by a factor of 10.”

He explains that there are not just costs in terms of the medicine, but also in terms of time. “A standard drug development program may take between five and 10 years. [At Albert Labs] we’re looking at reducing that timeline to one to two years,” he says.

Dr. Barratt-Johnson adds that psilocybin and other psychedelics lend themselves very well to accelerated research timelines.

“With psilocybin, we have a lot of data about general psychedelic use,” he explains. “From historical data, we know that we’re not going to be causing a large number of side effects because we are giving a small number of doses (one or two). Whereas if you’re looking at a cancer drug, you are going to have challenges such as liver problems and interactions with other drugs.”

A 2021 study led by Dr. Robin Carhart-Harris of Imperial College London’s Center for Psychedelic Research found that RWE can support the development of safe, effective, and cost-efficient psychedelic therapies. “We suggest supplementing confirmatory trials with pragmatic trials, RWD initiatives, and digital health solutions to better support the discovery of optimal and personalized treatment protocols and parameters,” the researchers recommended.

Real-World Evidence and a New Approach to Regulatory Decision-Making

He explains that in the post-Brexit U.K., the government has been very supportive of scientific research to avoid being left behind. “They really want medicines such as these (where they’ve got a problem with depression and anxiety in cancer patients), and there’s a political push behind psilocybin and psychedelics more generally so they want to work with us,” he says.

In December 2021, the country’s MHRA updated its guidelines setting out the criteria for the use of RWE and RWD in making regulatory decisions. The guidelines are intended to guide the design of studies and points to consider regarding whether an RWD source is of sufficient quality for its intended use.

In late January 2022, the FDA followed suit and released its own updated guidance on the use of RWD and RWE covering a range of topics including data sources, data standards, and regulatory considerations. The agency says that in the future “it intends to issue guidance on designing studies that use RWD, specifically externally controlled trials and randomized controlled trials conducted in clinical practice settings.”

“They are saying that the evidence we collect from these real-world settings is going to be considered at a higher level than it was before,” Dr. Barratt-Johnson explains. “With the methodology changing, regulators are going to look at RWE as part of the regulatory dossier to get a license at a much earlier stage, and take it more seriously.”

He adds that while regulators are competitive they also work synergistically as a worldwide network. “What the FDA has done is come in a little behind the MHRA and back the MHRA,” he says. “They don’t want to be left behind and they also want money from this research and possible manufacturing to come to them.”