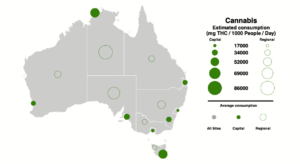 We’re not really surprised that samples collected from April to August 2021 showed that cannabis use increased in our capital cities.

But to be fair, heroin use also increased, while oxycodone remained stable and alcohol, nicotine, methylamphetamine, cocaine, MDMA, MDA, fentanyl and ketamine use decreased.

“The only illicit drug market relatively unaffected by COVID-19 related restrictions in 2020–21 was the cannabis market,” the report said.

“Unlike the other four major illicit drug markets, the cannabis market is almost exclusively supplied via domestic production.”

However, medical cannabis prescriptions are on the rise and hit 90,000 active patients last year – and it’s doubtful that the survey can determine the difference between illicit or legal cannabis use.

And we’re not alone in the wastewater testing, the European Agency for Drugs and Addiction (EMCDDA) has found that out of 75 cities examined, Barcelona had the highest amount of cannabis in its wastewater.

It had three times the amount as Amsterdam which was only number 2 on the list.

A total of 17 companies were in the green, with 10 companies flatlining and 10 stocks in the red.

Here are the ones with notable news:

The company received USA design patent approval for its Heat Exchange Probe (HEP) technology which is designed to heat or cool plants substrates in pots, grow bags and soil.

“Our extensive R&D initiatives have proved the effectiveness and validated our technology so we can now securely sell the HEP into the large and lucrative market,” executive chairman and CEO Boaz Wachtel said.

“The timing of the approval coincides perfectly with the establishment of our central US logistics hub, which we have begun to leverage and expedite sales opportunities from.”

Studies showed that EMD-RX7 has more than four times the bioavailability (a measure of the amount of the drug reaching the bloodstream) compared to the only registered CBD oil, Epidyolex.

Plus, most CBD available has poor bioavailability, meaning only a small amount of active medicine enters the bloodstream where it can be effective, MD Dr Michael Winlo said.

“This is why we have developed a range of convenient, ultra-pure CBD capsules with improved bioavailability.

“EMD-RX5 is an ideal dose form to support our low-dose registration strategy.

“Now, with EMD-RX7, we have a convenient dose form that we believe can deliver higher CBD exposures more efficiently allowing us to target a range of prescription-only indications – in other words, help the broad range of major unmet needs that affect the patients we treat every day at our clinical service subsidiary, Emerald Clinics.”

EMD is now planning a Phase 1 trial for EMD-RX7.

The medicinal cannabis and psychedelic clinical development company has snapped up the leading cannabinoid biotech company APIRx, for US$93 million (A$125m).

The company says the acquisition will expand its addressable market globally by more than US$400 billion annually while also expanding the company’s technical capacity with some of the industry’s longest standing, best-known scientists.

Last week the company said that its new state-of-the-art production facility near Mildura has reached the practical completion stage.

Cann also announced that the Office of Drug Control (ODC) has granted the necessary permit to allow commercial cultivation activities to commence.

The ODC permit has been issued under the ODC’s recently revised “single licence” regulatory framework, under which Cann has now been transitioned to a perpetual licence at all three of its production and research facilities.

The permit allows Cann to transfer medicinal cannabis plants from Cann’s Southern facility to Mildura, which is expected to further establish the company’s leading position in plant genetics.

The first commercial crop is expected to be harvested by June this year.

Last week the Pharma services company’s share price took a tumble after its submission for the Manufacturing Collaboration Stream Grant was unsuccessful.

IDT had hoped to be involved in the Australian government’s plan to bring mRNA research into the country.

In December last year, the government announced that it will build a new manufacturing facility in Australia alongside Moderna as part of the plan to produce respiratory mRNA vaccines in the country.

“Whilst we are disappointed in the outcome of the MMI Collaboration Grant process, the company is continuing to progress several alternative strategic options,” says IDT’s CEO, Dr David Sparling.

“This includes IDT’s application to Round 2 of the MMI translation stream which remains live,” he said.

At Stockhead we tell it like it is. While Incannex Healthcare are Stockhead advertisers, they did not sponsor this article.