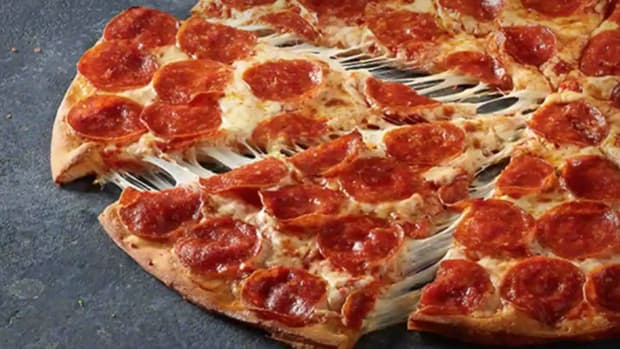 Papa John's is leaning into that stoner crowd audience.

A pizza most people would have to be high to eat moves a little closer to serving that market with a new limited-time offer.

Papa John's  (PZZA) - Get Papa John's International, Inc. Report and rival Domino's (DPZ) - Get Domino's Pizza, Inc. Report fill two niches in the pizza world — both are cheap and really easy to get delivered. The second niche is that both keep pretty late hours catering to people willing to eat a pizza after midnight. That's a group that includes late-shift workers, college students, people making very poor decisions, the drunk, and, of course, the high.

Now, since CBD pizza hasn't become a thing (wait for it) and actual cannabis pizza would still be illegal in many places, the company has introduced the next-best thing. Papa John's is testing limited-edition Hemp Sticks in select restaurants across the UK and Russia.

While few details on Papa John's new product have been made public, both versions are reportedly a garlic stick sprinkled with hemp seeds — the UK version mixes it with garlic butter and mozzarella while the Russian version swaps the butter for white garlic sauce. Think classic garlic breadsticks but with hemp.

What's The Big Deal With Hemp?

Hemp, or a strain of the cannabis plant that does not have the active tetrahydrocannabinol (THC) ingredient responsible for the "high" sensation, has been seeing a serious boon in popularity over the last five years. That has not stopped companies from using it in supplements and foods while making a variety of claims about what it does (generally without any proof of those claims),

Papa John's, it should be noted, has not made any health or wellbeing claims about its new breadsticks.

As selling products with THC is illegal in some states and subject to heavy regulation in others, having "hemp-flavored" products has become a popular way for some retailers and food producers to tap into the product's popularity without actually entering the marijuana industry. CBD, another non-psychoactive component found in marijuana, has been put into everything from sparkling sodas to chocolates.

CBD, it should be noted has only been approved for very limited medical uses and many expect the Federal Drug Administration to issue guidelines regarding its use in supplements. That has not happened, however, making the claims made by an CBD product manufacturer dubious at best.

What's Next For Papa John's?

Nationwide brands have, for the most part, largely avoided associating themselves hemp or CBD products outright — instead, they have only nodded towards the cannabis crowd with names like the "Wake And Shake" milkshake at Shake Shack  (SHAK) - Get Shake Shack, Inc. Class A Report.

Even if it's outside the U.S., a menu item like "Hemp Sticks" would be a major departure from this past strategy and indicate the rapidly-shifting attitudes toward marijuana in general.

While the Atlanta-based Papa John's is known for having a fairly stable menu, the pizza chain has had a number of interesting partnerships over the years — in 2019, four-time NBA champion Shaquille O'Neal joined the company's Board of Directors and became the owner of nine restaurants in the Atlanta area.

The $4 million partnership with the beloved and wildly popular former NBA star was meant to revive interest in the chain at a time of stagnation. For the large part, it worked — the Shaq-A-Roni Extra-Large pizza ($1 from each sale goes back to local communities) remains a popular menu item while company stock has risen 14% in the last year.

O'Neal joined the board after the company promised to clean up its image after founder "Papa" John Schnatter was fired from his namesake company after he used a racial slur.

Market volatility is on the rise. Unlock Real Money at our lowest price of the year and let our Wall Street experts do your investing homework for you.